In this job, we removed and replaced bollards, sign poles and signs in the parking lot of a Walmart. By describing the steps taken in this project, we hope it helps clarify the process of bollard and sign replacement. This may help you plan your project, and we hope you will give us the opportunity to bid on your projects. We will travel for large enough projects, especially to the south during the winter, when work slows down here.

This project consisted of the following tasks and specs.

This job consisted of removal and replacement of about 30 bollards with embedded sign poles and signs, as well as 4 above-curb signs that did not have bollards. These are the typical signs you see in a parking lot: RESERVED PARKING (handicap signs), STOP signs and Pedestrian crossing signs.

!! THIS IS VERY DANGEROUS WORK AND SHOULD BE DONE BY TRAINED AND QUALIFIED INDIVIDUALS ONLY!!

The paving contractor who subcontracted us was in a hurry because winter was quickly bearing down on Minnesota, as it was the last week in October, 2019. So, we had to do all our work after the lot was fully paved and striped. This helped us easily locate the new bollards in relation to the striping. Ideally you would at least remove all bollards before paving. Putting the new bollards in before paving would have been nice for us, but definitely their locations would have to be carefully mapped out so as to work with the striping.

The existing bollards were 96” of Schedule 40 6” Steel Pipe with 48” into concrete footing and 48” above grade. Also, of course, they were filled with concrete and each embedded a sign pole. They weighed 400-600 lbs I believe. The new systems would weigh 1200-1300 lbs by my calculations!

First, we would take our walk behind asphalt/concrete saw and cut a nice clean square around the bollard. The old bollard footings, as it turned out, weren’t all that big but the new footings would be 18” diameter footings, so in cases where the new bollard would go in the same place, we would cut a 24” x 24” square, allowing some play for the 18” auger which would come later.

Third, ENTER THE BOBCAT T750 Track Loader. We wrangled the old bollards out with this fine machine. Without going into detail and giving away our secrets, let’s just say there’s some tricks to getting this done! It is worth noting, that you could just as well use a Skid Steer or Mini Excavator, or even good sized Fork Lift. We used a track loader because we had a lot of dirt to move too.

Next, we cut additional 24” x 24” squares into the asphalt where new footings were to go, and no bollard existed before. And the jackhammer then followed.

Now, it was time for the 18” auger bit. We would auger out the holes down to 48”+ and insert a 45” Sonotube 3” below grade. If this was accurate, then the final height of the steel bollard would be pretty close to right on. When correct, we would backfill around the Sonotube leaving a few inches open below grade for the concrete to fill later. Some adjustments to bollard height would be made later when placing those in the holes.

Finally, it was time to set up the new bollards and poles within them, then pour the whole shootin’ match. Here is where a lot of experience is really important. There are many tricks and techniques to get the bollards at the right height and all plumb and lined up level.

Ideally, you shore everything up before concrete, especially if bollards are in a line. This requires some time with getting the height correct and bracing them plumb. Concrete is heavy and when it pours it will move the bottom of the bollard around unless you find a way to keep it from moving. Some say it is good to fill the bollard half way first, making it heavy, and then pour the footing, then finish filling the bollard. However it is achieved, the final act is to finish the rounded top around the pole, and then the square at grade around the bollard. 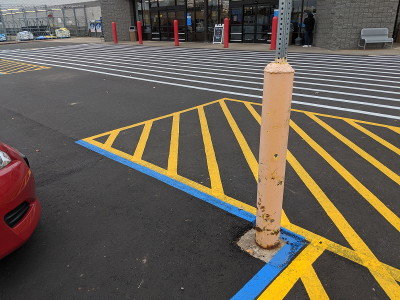 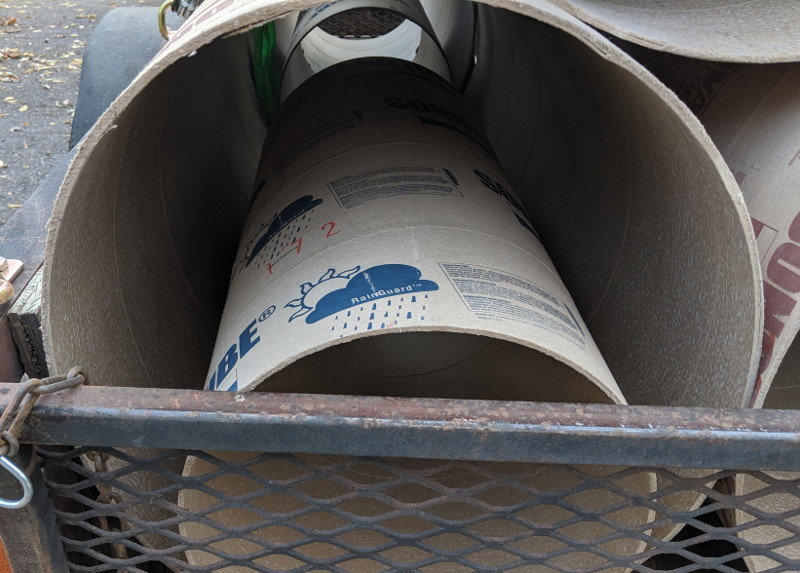 If the pole is freely floating within the bollard, it is very tough to get it and the bollard plumb and centered at the same time. You want the pole to be in the center of the bollard all the way down, 4’ below grade in this case.

With 6” pipe like this and our poles are 2” perforated galvanized 12 ga. square tube (telespar), I cut 2 5/16” threaded rods and connected them in an X (one through each direction) about 6” from the bottom of the pole, using nuts to center them fairly accurately. Then when you slide this down the bollard, the pole will be in the center at the bottom. You could do this near the top of the bollard too, but filling the bollard kind of requires it to be offset, unless you have a pump truck and a small enough pump hose. But here, you can just center the pole in the bollard. If the bollard is plumb, then the pole is really close. I check them both anyway of course.

We had a few stop signs above the curb that didn’t have bollards. They had 27” deep, 12” diameter footings specked. Also, it was specked that they would have anchor tubes. Anchor tubes are a corresponding telespar sleeve so that the actual sign pole could be removed and replaced at a later date. The anchor tubes were 2 ¼” 12 ga. perforated galvanized steel square tube (telespar) which sleeved around the 2” pretty nicely.

The installation of these was pretty straightforward. It is important to duct tape the holes and ends on the anchor tube so it doesn’t get concrete inside. Also, I built a T shape with 2x4s on edge and temporarily bolted the anchor tubes to it all squarely. We needed 3”-4” of the tube above grade, so the fact that 2x4s are 3 ½” wide was perfect. Then place the mess over hole and screw it to stakes. You can check 2x4s for level, but be sure you check the anchor tube for plumb in case something got thrown off. In other words, don’t trust that the 2 x 4 frame is at right angles with the tube. 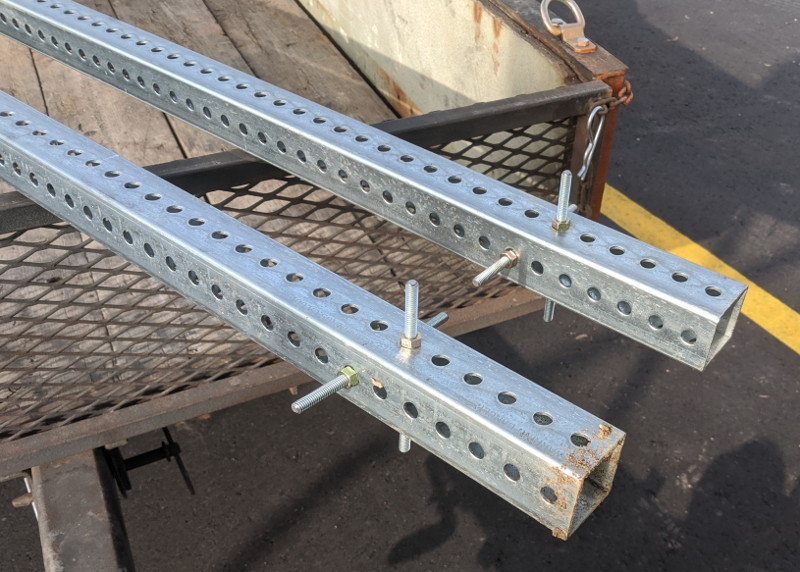 The sign pole heights were very important here, so some calculations were necessary when we ordered the telespar sign poles. The telespar comes in 24′ stock lengths, and almost every pole was greater than half that length, so the drop (cut off piece) wasn’t long enough to do anything with on this job. Therefore, it made the most sense to have them cut to length and deburred by the supplier. Had the drop been of value to us, we’d just order the stock lengths.

In cases where we weren’t sure or confident about pole length, we’d leave them a little long and lop them off with a portable bandsaw when we were finally installing the signs. In our case, it was specked that no sign would be below seven feet. So calculations would be FOOTING DEPTH + 7 FEET + SIGN HEIGHT.

So our pole lengths varied from about 12.5 feet to 15.5 feet as I recall. Knock on wood: never did we have a sign pole that was too short. Because, you’d be forced to sleeve it probably with a 1 3/4″ inner sleeve to make it the correct height, and run the connecting bolts sideways then so they didn’t interfere with signs laying flat against pole.

Finally, it was time to put the signs on. We used a rolling baker scaffold set at about 4-5 feet. Below in the scaffold, we made an adhoc shelf out of 2x4s and a piece of plywood. On there, we’d put a stack of signs, the generator and the portable bandsaw. On top we’d have our bucket of 5/16″ fasteners, wrenches, tape measure and trusty Makita Impact Driver with mag tip. Then we’d roll around from sign to sign easily. At this point, installing is a breeze.

One thing to note is that, if the grade isn’t exactly level but you have a line of signs that need to look level with each other, do the end signs first and then pull a line across for the others.

Finishing the Bollards and Striping

On this project, the parking lot striping contractor was in charge of painting bollards. The bollards were painted Safety Yellow and Striping was redone over the concrete footing squares where it had been cut out. 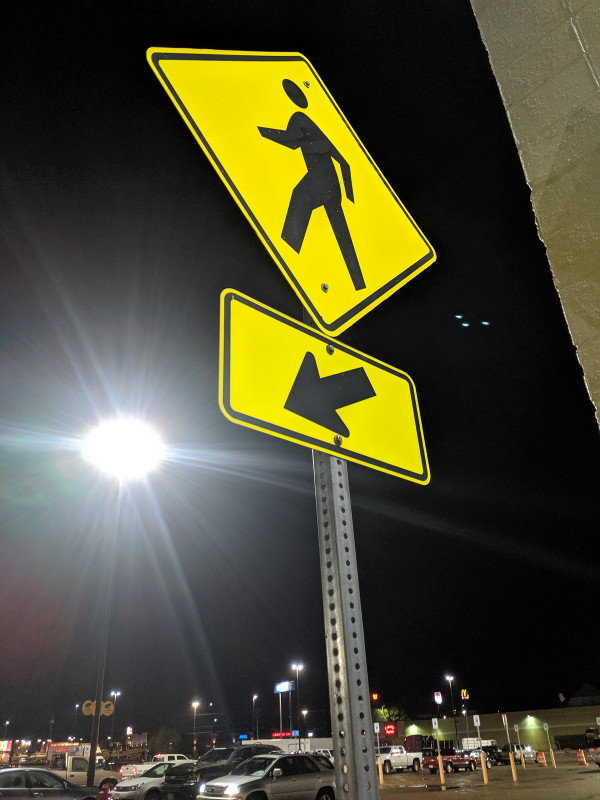